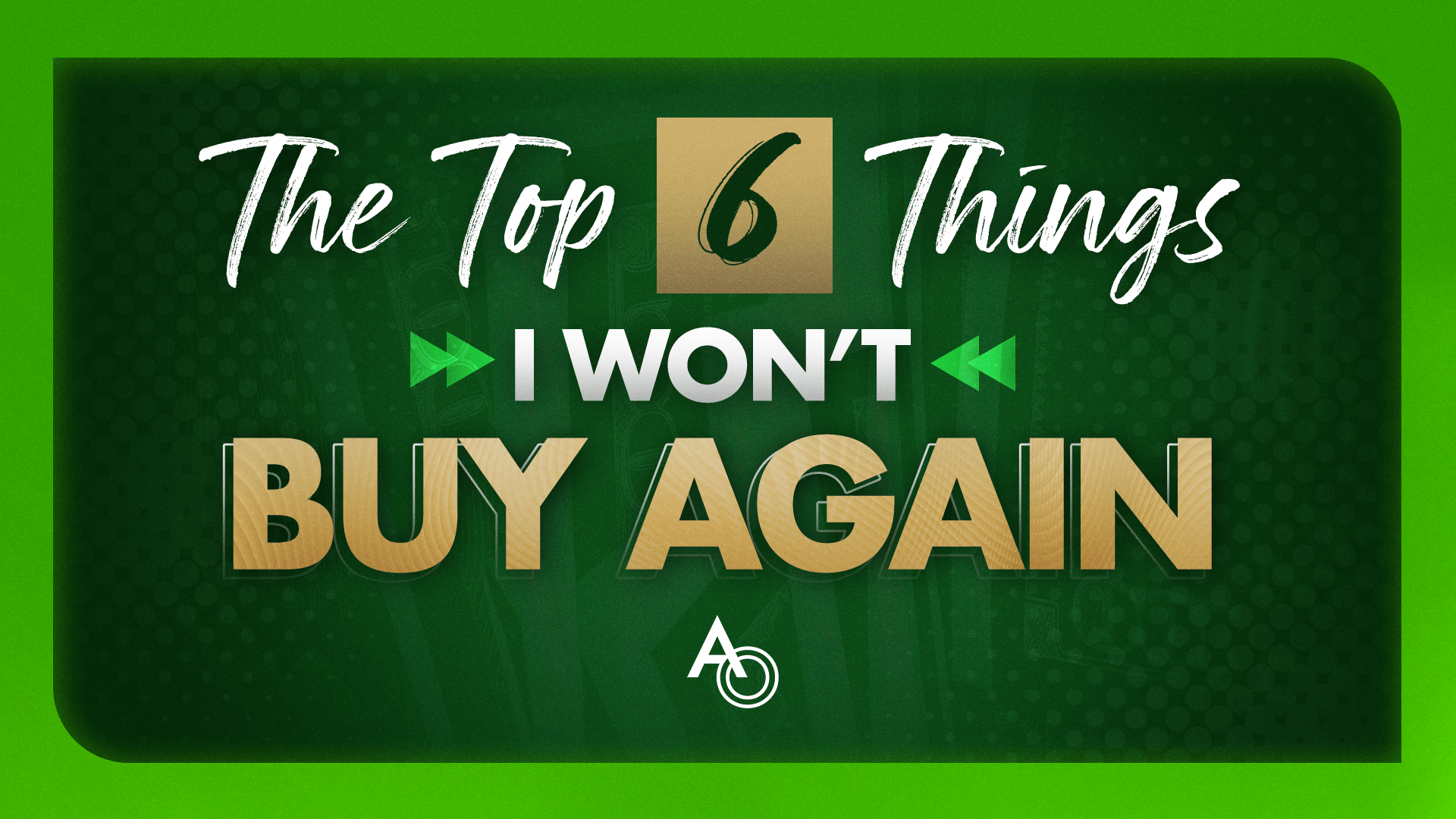 We've all spent money on things we regret, and ya boy is no exception. One recent survey from Charles Schwab shows that most Americans regret doing some past spending instead of putting that money into retirement savings.

Mistakes happen, especially when you're just starting your wealth-building journey. So, I want to be transparent about my money mistakes and share the top six things I'd never spend my money on again. And hopefully it inspires you to give up those things holding your finances back.

I'm going to start this list with a controversial one, but bear with me: Yes, I’ve spent money on strip clubs, and I would never spend money on strip clubs again. First of all, it’s not a good way to meet women. Just because she’s showing you attention doesn’t mean she wants to be your girlfriend. This is her job, and she’s way more interested in your money than she is in you.

Check this out: Strip clubs make as much as $6 billion every year. A person could spend hundreds to thousands of dollars at a strip club in one night. You have to pay the cover charge, drinks and dances. That adds up! Gabrielle Union said she spent $10,000-$20,000 on a strip club. Maybe if you have Gabrielle Union money, you can afford a strip club once in a while, but not before.

Don't spend too much money on a first date. And here’s why:

The average cost of a date in the U.S. is $116. And the average person goes on about nine to 12 dates before they find “the one.” Listen, don't waste your money on expensive first dates, taking her to fancy hotels or expensive dinners. A man or woman should fall in love with who you are, not how much money you can spend on them. Remember, you’re just trying to get to know each other at this point.

If you're new to dating, I want you to set a first date budget. Decide how much money you can afford to spend on dates each month. This comes after you budget for all of your most important needs, like housing, food, transportation and utilities. If you find that you don’t have much for dates at the end of making your budget, then put together a list of free places that you could take your date.

A date is usually a low-key thing when you're first getting to know someone, and you might go for coffee or drinks at a bar, meet up in a park, or walk around your old college campus. The point is that, when you're dating, you want to be able to spend time with someone without the pressure of spending a lot of money.

Also, fellas be aware that for some women, spending too much on a single date is a sign of being too eager to hook up. Don’t come on too strong by going all out on a date.

We all have our vices. For some, it's too much shopping. For others, it's too much drinking. And for some people, it's drugs. While I’ve never actually bought drugs, I have purchased cigarettes once, and I regret it.

I understand that a lot of people use drugs recreationally, and if that’s cool if it’s your choice and it’s legal where you are. I’m just saying that I personally wouldn’t. First, that money would have been better off invested in something that I can use today. And second, it’s bad for my health.

The average smoker spends about $1 million to $2 million on tobacco-related costs in their lifetime. If you invested that money, you'd have tens of millions of dollars by age 65. In 2020, the average marijuana consumer spent between $500 to $2,500 annually. If that's how you spend your money, that's fine, but it's good to know the cost.

It's easy to convince yourself that drugs are worth it because they'll help you escape your problems, but there's no escaping those problems—you have to face them head-on if you want your life to improve.

The next time you're tempted to spend money on drugs, consider this:

4. Subscriptions I don’t use

I mean, do you even know how many subscriptions you have? There are countless subscriptions out there: Netflix, Hulu Plus, Amazon Prime, Birchbox, and Ipsy, among others.

Subscriptions are great! They're convenient and automatic, and you never have to worry about forgetting a bill. One problem, though, is that they also make it harder to determine where your money is going.

Americans spend over $200 on monthly subscriptions. And most need to realize how much they're spending every month.

There are a lot of services out there that require monthly payments from you to stay current. But honestly, what good does that service do for you once the novelty wears off? (And it will.)

We pay for so many subscriptions that we don't actually use. Whether it's a magazine, a streaming service, an online course, or an app. The best way to cut down on your spending is to identify the things that you don't need to spend money on anymore, like those subscriptions.

For example, I used to have a subscription to a luxury goods box! A friend of mine put me on to it. It’s thousands of dollars of luxury items for a fraction of the cost every month. Y’all, I signed up so fast. But guess how much of that stuff I actually used? Yep. Not a thing. The same went for my gym membership, my monthly wine subscription and my monthly clothes subscription.

My advice is to cut back on those expenses as much as possible so that your hard-earned money can go towards things that matter most to you, like building wealth and investing in your financial future.

Horoscopes are not based on science and are just a waste of money, but some people still pay to get their horoscopes each day.

When you go to a psychic or astrologer, they will read your palm or give you a tarot card reading. Even though they claim that they can predict the future, they can't do anything better than chance could.

The psychic industry was worth $2 billion in 2019 and became even more valuable in 2022. And who do you think they’re getting their money from? Hard-working people like you and me who are usually going through something and want some assurance of the future.

Listen, I will never spend my money on these again. Astrology is not a science, and neither are psychics or horoscopes.

They're all scams designed to take your money and give you nothing in return. If you want to know what the future holds for you, open up a newspaper or look at the news online once in a while. It's easy to find out what's going on in the world without paying someone else for answers that they don't have in the first place!

There is no good evidence behind these things. In fact, there is very little evidence that these things work at all. Some evidence even suggests that people bring their lives into line with astrologers' predictions.

A study by the British Medical Journal found that out of 210 horoscopes studied, only five could be confirmed as being accurate. The same study found that when horoscopes did appear accurate, it was because they were vague enough to fit anyone.

Just because it's a "deal" doesn't mean it's a deal for you. Be honest with yourself. Are you going to use that thing? Think about the ways you could invest that money or use it for something that'll advance your future.

You can't help but get excited when something is on sale. It's just so exciting to see that store is having a sale, especially if it's something you want or need.

But sometimes, those sales are too good to be true, and you spend more money than you originally planned to spend.

Let’s say you're in a store, and you see something on sale. It's only $5 off the original price! Listen, don't let the discount fool you. Buying something just because it's on sale is one of the worst things you can do with your money, especially if you don’t need it. That’s a sure way to waste money on things you’ll never use.

And it’s how a lot of people get deeper into debt or miss their savings goals. Mindless or impulsive spending isn’t healthy for you or your bank account.

Before buying anything on sale, make sure you need it and it’s worth the price. If not, then don't buy it just because it's cheap!

There's a difference between finding something you like at a great price and buying something just because it's on sale. Spending money on things that reflect who you are and what you love is more satisfying than saving a few dollars on stuff that isn't even what you wanted in the first place.

I've been guilty of this myself. Even when I'm not really in the market for anything else, I feel like I have to take advantage of a good deal. But it never works out. I only wind up wasting time and money at the store.

If I'd just waited until I knew what I wanted or until it was time to replace something, I could have gotten exactly what I needed for less money and less hassle than it took me to go out and buy something random that I think I’ll use someday.

A simple life includes knowing what is not worth spending money on.

A simple life includes knowing what is not worth spending money on.

You can spend your money in many ways, but a few are pointless and a waste of time.

People do plenty of things with their hard-earned cash that doesn't matter, like eating out at restaurants, buying designer jeans and shoes, buying coffee every day, and going to the bar every weekend. These things might make them happy for a while but also cost more than they're worth.

A simple life should be based on what's important to you and what makes you happy, not something that looks good or feels nice for five minutes before boredom sets in again (and believe me – I know how boring it gets).

The six things I'd never spend money on again are:

4. Subscriptions I don’t use

6. Stuff just because it’s on sale

I hope this list helps you stay on track with your finances and inspires you to take a look at your spending and cut out whatever you don’t need.

The bottom line is that there are plenty of things worth spending money on, but some things aren't worth the expense. 5 money tips every man should know. (Ladies watch this too)

10 Places for Singles to Live

Sign up for my newsletter and I’ll drop some encouragement in your inbox on a regular basis. Text me at 615-930-3431 to be the first to get exclusive content, the latest news and free resources.

I serve ambitious and purpose-minded people who are on a journey towards mental, spiritual, and financial freedom.